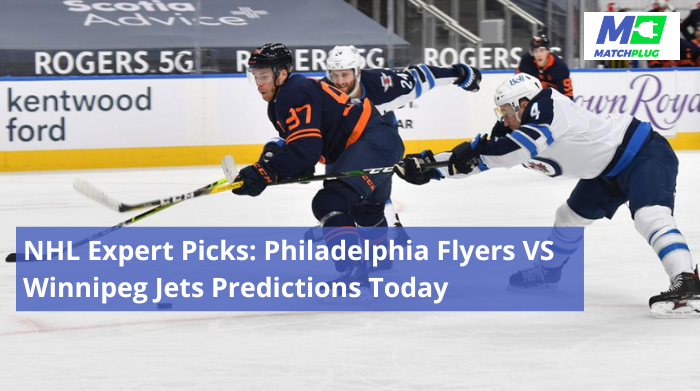 Winnipeg Jets have a 30-16-1 record and rank second place in the Central Division, while the Philadelphia Flyers have a 20-20-7 record and are close to the bottom of the Metropolitan Division.

The Jets hope to remain close to the top of the Western Conference, and the Flyers want to turn the season they’ve been having around. These motives make the upcoming game an interesting one.

MatchPlug is a sure Prediction Site where you can find previews and odds for all NHL games and American Sports. On that note, these are the best Betting Tips Today for Philadelphia Flyers and Winnipeg Jets.

Odds as seen on 1XBet and BetMGM.

These are some NHL Predictions Today by experts to pay attention to if you are betting on the Flyers and Jets game:

Betting On The Philadelphia Flyers

Philadelphia’s offense has struggled this season, scoring just 2.78 goals per game. Kevin Hayes, Travis Konecny, and Scott Laughton scored a combined 49 goals and 69 assists, but the rest of the offense line was found wanting.

Only six of the Flyers’ skaters have eight goals or higher and because of this, opposing defenses can eliminate their weak offense.

The Flyers’ offense isn’t the only part of the team that battles with performance, its defense struggled too, allowing 3.22 goals per game. Travis Sanheim and Ivan Provorov share 3.8 defensive points. The other members of the Flyers’ defense can’t perform, allowing opponents to score shots as they, please.

Additionally, Philadelphia’s goaltender Felix Sandstrom couldn’t do his job in the net, with a .888 save percentage and a 3.37 goals-against average on 251 shots.

Betting On The Winnipeg Jets

Winnipeg Jets have had a fantastic season with their offense scoring 3.24 goals per game. Kyle Connor, Pierre-Luc Dubois, and Mark Scheifele scored 71 goals and 77 assists leading the two top lines. The rest of the offense line played well too, Blake Wheeler, Cole Perfetti, and Adam Lowry combined for 26 goals and 57 assists. Defensemen Josh Morrissey and Neal Pionk added 15 goals and 56 assists put the offense over the top.

Furthermore, Connor Hellebuyck, Winnipeg’s goaltender stepped up too with a .923 save percentage and a 2.43 goals-against average on 1102 shots.

Philadelphia will move to win this match on their home ice, but Winnipeg who has had a fantastic season will try to control the game.

The Jets with their 3.24 goals per game average, should score several times against the Flyers’ defense that allows 3.22 goals per game. Connor, Dubois, and the forward unit will control the puck in the offensive zone and create open shots using quick centering passes.

Winnipeg will also disable the Flyers’ offense as Morrissey, DeMelo and the defensive unit create turnovers in the defensive zone and limit shots on the Jets’ net. This should allow Hellebuyck to make lots of big saves.

NHL Expert Picks select the Winnipeg Jets who are predicted to win the match with a superior performance on the road.