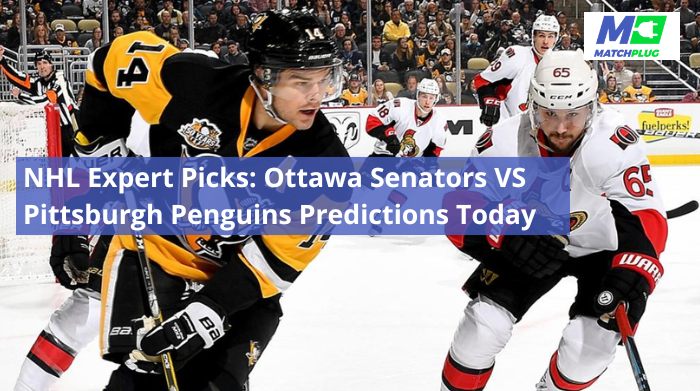 Ottawa Senators VS Pittsburgh Penguins is a game between two teams hoping to move past their equally challenging season.

The Senators have a 19-21-3 record and have dropped to the bottom of the Atlantic Division, no thanks to their consecutive losses.

Pittsburgh Penguins on their own part have a 22-15-6 record but only won three out of their past 10 games.

Both teams will try to improve in the Eastern Conference and due to this, today’s game promises to be an interesting one.

Predictions and Betting Preview for Ottawa Senators And Pittsburgh Penguins

Odds presented by 1XBet and BetMGM.

These are some NHL predictions for today’s matchup between the Senators and Penguins.

The Senators’ Defense Is A Let-Down

The Ottawa Senators are having a rough season with their offense falling, scoring only 2.91 goals per game with just one goal in the last two games. Brad Tkachuk and Tim Stützle share 34 goals and 48 assists to lead the top two lines, but the other members of offense have struggled.

Ottawa hopes that Shane Pinto and Derrick Brassard can step up, especially as they play a vital role in the team’s offense but scored only 16 goals and 12 assists this season.

While the Senator’s offense has struggled, their defense is a source of disappointment to the team. Thomas Chabot and Jake Sanderson combine for 4.3 defensive point shares, but the other defense members allowed opponents to score open shots on the net.

In addition, goaltender Anton Forsberg battled with a .902 percentage and a 3.25 goals-against average on 635 shots.

Penguins Hope To Improve Their Defense

The Pittsburgh Penguins are having a hopeful season with their offense now scoring 3.21 goals per game. Sidney Crosby, Jake Guentzel, and Evgeni Malkin scored 54 goals and 75 assists to lead the top two lines, however, the rest of the Penguins’ offense has also improved.

Rickard Rakell, Jason Zucker, and Bryan Rust have a combined 36 goals and 48 assists, Jeff Carter, Kasperi Kapanen, and Brock McGinn contributed 23 goals and 28 assists to the back of the forward unit, making Pittsburgh’s offense hard to beat.

The Penguins’ offense has been great so far, but their defense is drowning, allowing 3.02 goals per game. Marcus Pettersson and Jan Rutta combined for 3.9 defensive point shares and 140 blocked shots, but the other arm of the defensive unit struggles, allowing opponents to score open shots on the net at will.

Additionally, goaltender Casey DeSmith is struggling with a .906 save percentage and a 3.10 goals-against average on 554 shots.

Ottawa VS Pittsburgh will be an exciting game between two sides of the NHL looking to improve in the Eastern Conference. The Senators want to win on their home ice but the Penguins want to find favourable games on both sides of the ice.

Pittsburgh will build off a four-goal game and find the back of the net at will against Ottawa’s defense that allows 3.23 goals per game. Sidney Crosby, Jake Guentzel and the other members of the forward unit will carry the puck into the offensive zone and create open shots with efficient puck movement near the net.

The Penguins will also limit the Senators’ offense which has scored just one goal in the last two games. Marcus Pettersson, Jan Rutta, and the remaining defensive unit will create turnovers in the defensive zone and limit shots on the net to allow Casey DeSmith to make many big saves.

NHL Expert Picks predict that Pittsburgh should win the match with a dominant win on the road.