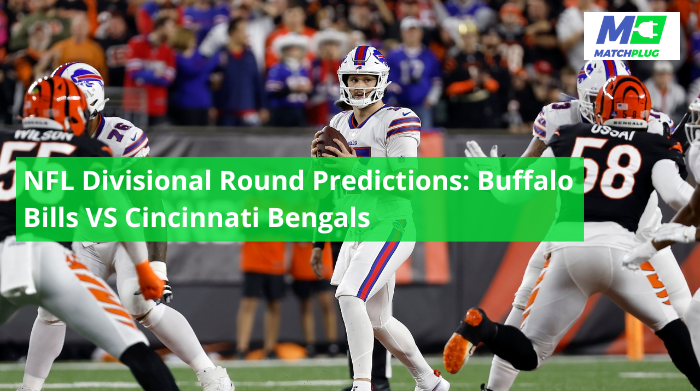 The Buffalo Bills and Cincinnati Bengals will have their rematch two weeks after Bills’ Damar Hamlin suffered a cardiac arrest at their last game.  However, this time they’ll be playing in the AFC Divisional Round games for the 2023 NFL playoffs.

Cincinnati pulled through a challenging game against the Raven last Sunday night, where they won 17-24. While Buffalo also went through a gruelling game at their home against the Miami Dolphins to win 31-34

This would be the second time these teams are meeting again after Hamlin’s collapse and there’s no doubt that fans are waiting to see how the game turns out, as the Bills and Bengals have unfinished business from their Week 17 regular season game.

MatchPlug brings you analysis and the best NFL Predictions this week surrounding the anticipated Buffalo Bills and Cincinnati Bengals game.

Betting On The Buffalo Bills

The Buffalo Bills had some challenges during their Wild Card game against the Miami Dolphins and now they’ll be facing the Bengals in a more challenging matchup.

Head coach, Sean McDermott should be worried that his team still can’t secure the ball, the Dolphins was the second team to score at least 300 points against the Bills this season.

In the regular season the Buffalo Bills were gone third-most turnover-prone offense with 27 turnovers, a trend the carried in their game with Miami, when they lost it three times to the Dolphins. They also recorded four fumbles.

Josh Allen was responsible for three losses, he threw two interception passes for the sixth time this season’s and lost another fumble. Buffalo are ranking 11th in that NFL with 24 fumbles recovered.

The Cincinnati Bengals’ defense started playing well since the second half of the regular season which could be another issue for the Bills to deal with on Sunday. If Allen and his group can’t hold on to the ball, Joe Burrow will lean heavily towards using it to destabilise them.

On the part of their defense, the Bills played well against Miami, even they didn’t do much about the Dolphins’ loose balls. They forfeited 231 total yards and intercepted Skylar Grey twice and on third down, they dropped the Dolphins to a 4-16 mark.

27 fumbles saved, fourth most in the League, Buffalo’s defense ended the season in the Top-10 for throws and top defense for categories for rushing. They also earned second place in the NFL for efficiency in the red zone by allowing TDs on only 45.9% of opponents trips.

Betting On The Cincinnati Bengals

Cincinnati is one step closer to  becoming American Conference Champions again, only this time they’ll find this game tougher than what they found the Wild Card round.

Thanks to St.Hubbard’s defense play, who returned a loose ball 98 yards to the end zone, saving the Bengals from loosing their playoff spot to the Baltimore Ravens who fought fiercely in Lamar Jackson’s absence.

Cincinnati only mustered 234 total yards against an ironclad Ravens defense, which raises some concern for their game against the Bills who have a great defense too.

Joe Burrow who was intercepted four times against the Ravens, will again have low protection due to injuries to key players on the Bengals offensive line. Burrow will need the Bengals ground defense to show up against the Bills.

Burrow has consistently proven himself a worthy quarterback by showing up in crucial moments, and during this campaign he led a team that closed the regular round with 8 successive victories.

The Bengals’ offense was one of the best ones in the league in terms of passes, and ranked fifth best in the red zone with 64.9% efficiency.

Their defense finished top 10 in the league, conceding 18 points or lower in four out of their last six games. On the ground they were the seventh team that conceded the fewest total yards and fourth team that allowed that lowest TDs.

This matchup between the Bills and the Bengals are between two of Super Bowl favourites. Over the course of the season, both teams proved that they deserve a spot at the top of the NFL and they have a talented team that can win the league.

Unluckily for these two top teams, one of them has to lose the competition because they can’t keep up with the magnitude of attack this game needs.

Both defenses are among the best in the circuit, but they’ll each face Joe Burrow and Josh Allen, two players who are among the top five quarterbacks in the NFL, who threw 35 touchdowns each during the regular round.

With both teams being somewhat evenly matched, the team that has the lowest slip ups, will have an edge ahead in the game. Burrow will try to evade being caught, Allen will battle constant turnovers.

In this game, home field advantage won’t be much of a deciding factor, not minding the fact that Bills played for 7-1 at home. Cincinnati too performed exceptionally well at home with a 6-3 record. One important thing to note for this game is in the past 10 games these teams played, the Over had a 7-3 record.