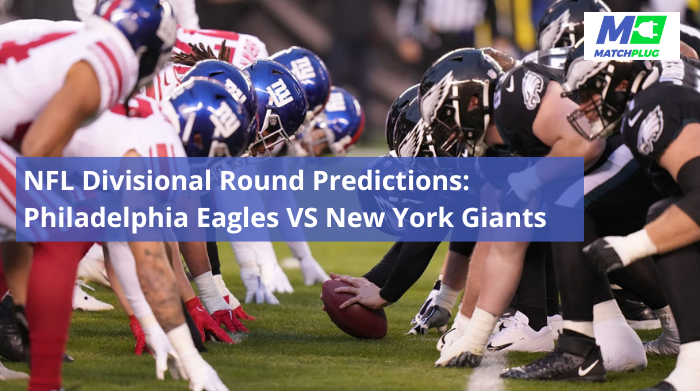 The Philadelphia Eagles Vs New York Giants playing against each other in the NFC Divisional Round games will reopen a rivalry in the NFC East, as they battle for a spot in the NFL playoffs’ second round in 2023.

Last weekend, the New York Giants pulled off an upset in the Wild Card round after beating the Minnesota Vikings 31-24 on the road, while Philadelphia Eagles replenished themselves after ending the regular round with the best record in the NFC.

New York and Philadelphia met a few times during the regular round, with the Eagles winning both games.

Without wasting any more time, MatchPlug presents a preview and NFL Predictions for the Eagles VS Giants’ Divisional Round match.

Betting On The Philadelphia Eagles

During the last week of the NFL regular round, the Philadelphia Eagles marked one of their best seasons by winning the NFC East title and the title of the best team in the National Conference.

Quarterback Jalen Hurts returned to play for his team, after missing two games that the Eagles lost, and to revive Philadelphia’s offense.

Hurts who runs for 700 yards, scores 13 times, throws over 3,700 yards and 33 touchdowns, was certainly missed on the Eagles’ frontlines. The Giants will find him a problem, mainly because their ground defense is ridden with many issues.

The Eagles’ offense is feared because all their lines are balanced, which was what earned them second place with the second most points scored. In passes, their net yards gained per pass were the third-best average with 7.1. No team scored more times on the ground than them with 31, they registered 90 penalties and were fourth in efficiency inside the red zone with 67.8%.

Furthermore, Philadelphia’s defense is as strong as its offense, and their opponents have gained over 350 total yards against them on only three occasions, and a single game of over 400. They were also the team that allowed the lowest total passing yards in the season and they had the most sacks with 70.

Philadelphia’s weak point however is that they finished a little above league average by stopping the ground attack, which is the Giants’ attacking weapon, that New York couldn’t capitalize on in the regular round.

Betting On The New York Giants

After defeating the Minnesota Vikings in their first postseason game since the Super Bowl XLVI win over the Patriots, the New York Giants will find it difficult to start a winning streak when they play the Eagles.

They looked good in Minnesota, but today they’ll need to play better than they did last week if they want to win against the same opponents that dealt with them the two times they met this year.

New York could defeat the Vikings because of Daniel Jones’ impressive work. Under the guidance of head coach Brian Daboll, Jones is having the best campaign he has ever had in his career.

The quarterback threw for 301 yards, two touchdown passes, no interceptions, and 78 rushing yards, while Minnesota had one of the worst defenses in the season. Jones spearheaded the attack on the Vikings, for New York which only scored 30 points all year.

Complementing Jones’ offense was Saquon Barkley’s two touchdown runs and a defense that stopped one of the NFL’s best offense. The New York Giants will need to bring this energy or higher when they go toe-to-toe with Jalen Hurts and his Crew.

On the defense side, New York had one of the worst defenses in the NFL, in terms of stopping the ground game, and the Philadelphia Eagles know this weak spot. In the late two regular season games they played with the Giants, they gained 335 total yards, and seven touchdowns, five of which came on carries using this strategy.

New York’s defense is a secret the Eagles used throughout the season and if they do want to advance, even Jones and his offense can’t stop them if they don’t get their defense players in line.

NFL Predictions this week say that the New York Giants are adept in postseason surprises and won six of their last seven away games in the playoffs for a good reason.

The thing now, however, is that New York couldn’t answer all the defeats they faced from the Eagles during the regular season round. The Giants were outmatched in every area, even in the Eagles’ weak areas, who came to the game rested for the week and with a 7-2 record.

After the prowess Daniel Jones showed against the Vikings, there is a chance that he’ll have another good game. But it remains to be seen if it’ll be enough to give the Giants’ defense a good advantage.

Everything comes down to Jalen Hurts who is the powerhouse of the Eagles. If Hurts plays well in today’s game as he has been doing for most of the season, he could hurt the New York Giants’ defense.

There is a reason why Philadelphia scored fewer than 20 points only once under his watch.