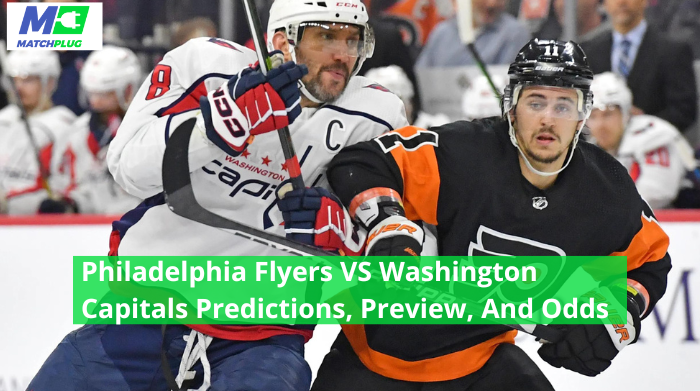 The Philadelphia Flyers VS Washington Capitals game will feature two teams who are headed in opposite directions for the start of the season.

Washington has a 23-14-6 record and after securing seven wins in their past 10 games, they have reached the top of the Metropolitan Division.

Philadelphia has a 16-8-7 record which is the second-worst record in the Metropolitan Division.

Both teams want to improve within the division and the Eastern Conference, so today’s game should be an interesting one.

MatchPlug has all the NHL Predictions Today you can use to inform yourself before the start of the game.

These are some expert NHL predictions surrounding today’s game between the Flyers and Capitals.

Capitals Have A Potent Offense

Washington Capitals are having a fantastic season with their offence stepping up and scoring 3.36 goals per game, plus 22 goals scored in their last five games.

Left Winger Alexander Ovechkin scored 29 goals and 19 assists, and Dylan Strome and Evgeny Kuznetsov added 14 goals and 53 assists to the top two lines. The rest of the Capitals’ offence has been awesome too.

Connor Sheary, Anthony Mantha and Marcus Johansson have a combined 30 goals and 41 assists, and defensemen Erik Gustafsson and Nick Jensen have added eight goals and 35 assists from the point to open up the defence.

The team’s defence has also shaped up, allowing only 2.70 goals per game with only five goals in the past three games. Gustafsson and Jensen share 4.8 defensive points shares and 124 blocked shots. Trevor Van Riemsdyk, Dmitry Orlov, and Martin Fehervary have a combined 5.9 defensive point shares to add depth to the unit.

Additionally, goaltender Darcy Kuemper has been good with a .920 save percentage and a 2.45 goals-against average on 766 shots.

Philadelphia Flyers are having a forgettable season, particularly because their offence is struggling, scoring only 2.78 goals per game.

Travis Konecny, Kevin Hayes, and Joel Farabee have a combined 40 goals and 62 assists to lead the top two lines, but the rest of the offence is not doing well. Only five Flyers’ skaters have nine goals or more and opposing defences can limit the top-heavy offence due to this.

The Flyers’ offence can’t stay afloat, but the team’s defence is their most recent source of disappointment, allowing 3.22 goals per game.

Travis Sanheim and Ivan Provorov have combined for 3.3 defensive point shares but the rest of the unit is found wanting, allowing the opposition to find open shots on the net at will.

The upside however is the goaltender Carter Hart’s play which is a .908 save percentage and 2.97 goals-against average on 898 shots.

BetMGM Odds for Flyers VS Capitals

1XBet Odds for Flyers VS Capitals

The Flyers showed promise in their recent games, but the Capitals have the makings of one of the Eastern Conference’s best teams. Washington will try to control this game in the first period.

Washington averages 3.26 goals per game and will seek out the back of the net with Alexander Ovechkin, Dylan Strome, and the rest of the forward unit building a strong offensive zone presence and creating open shots.

With only five goals allowed in the last three games, the Capitals would also limit the Flyers’ offence using Nick Jensen, Dmitry Orlov, and the rest of the defensive unit creating turnovers in the defensive zone and barring shots on the net.

That should allow Kuemper to make saves. The Capitals are expected to win this game with a strong performance on the road.