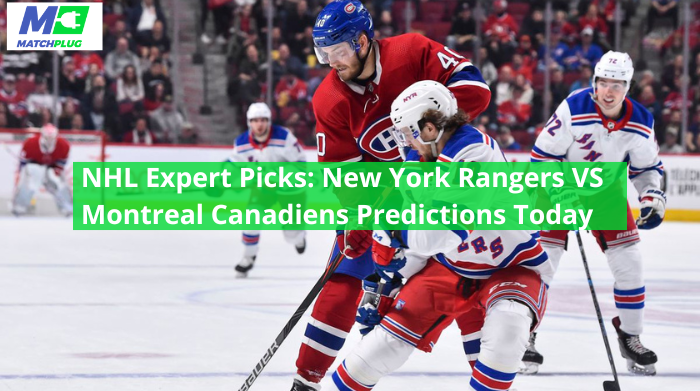 Montreal will play a game on the road, as they face off with New York at Madison Square Garden in the New York Rangers VS Montreal Canadiens game.

NHL Scores show that the Canadiens has a 17-22-3 record, while the Rangers have a 24-12-7 record. Both teams have played each other once this season, with New York, winning the matchup.

The game between Rangers and Canadiens will happen today at 14:00, so ahead of the game, MatchPlug has brought you some reliable NHL Predictions Today you can use to inform yourself before the start of the game.

Odds presented by 1XBet and BetMGM.

These are some expert NHL predictions surrounding today’s game between the Rangers and Capitals.

New York Rangers Win 5 Out Of Their Last 6 Games

The Rangers were a -130 favourite in their last game and they beat the Dallas Stars 2-1 in overtime. Adam Fox scored the overtime winner and he had an assist. K’ Andre Miller scored a goal, and Igor Shesterkin blocked 24 out of 25 shots from their opponents.

New York’s offense has been playing well recently, they scored 4 goals or more in 5 out of their last 9 games. Rangers rank 16th in goals per game and 9th in shots per game.

Artemi Panarin leads with 46 points and Mika Zibanejad is next with 45 points. Mika and Chris Kreider both lead the Rangers with 19 goals. Vincent Trocheck has 31 points and Kreider has 30 points.

Adam Fox on the other hand has 44 points, he is 3rd in points, 4th in goals, and third in assists amongst all the defensemen in the league. Fox is on a six-game point steak. K’Andre Miller has 23 points and is on a five-game point streak.

Montreal Canadiens Play Back To Back On The Road

The Montreal Canadiens are on the back end of continuous back-to-back road games. Their offense has been poor. Montreal ranks 29th in goals per game and 30th in shots per game. They scored two or fewer goals in 7 of their last 10 games.

Nick Suzuki leads the team with 35 points, and Cole Caufield follows with 25 goals and ranks 8th in goals in the NHL. Kirby Dach has 26 points this year.

In addition to their defense faltering, the Canadiens’ defense and goaltending have both been poor too. They rank 29th in goals per game and 28th in shots against per game. Jake Allen’s record reads 10-16-1 with a 3.52 GAA. While Sam Montembeault has a record of 7-6-2 with a 3.39 GAA and .902 SV%.

New York has been playing really well lately, winning 5 of their last 6 games. Their offense works too, they have scored 4 or more goals in 5 of the last 9 games. The Rangers’ defense and goaltending have been very good too this season.

In the past too, New York has won 4 out of the last 5 games with Montreal, and also defeated them on January 5th this season with a 4-1 score.

With the Rangers playing at home, and the Canadiens playing road games back-to-back, New York will win this match by two or more goals.