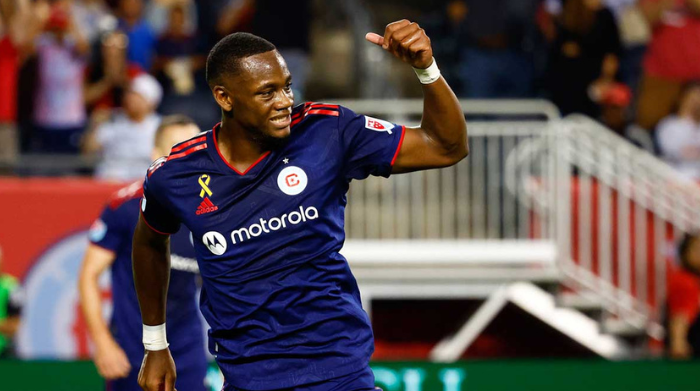 Before Villa drafted him, some other Europe clubs like Chelsea and Liverpool were hoping to get the striker who scored eight goals in 27 games for Fire last season. But he was scouted by Aston Villa, earning him his first cap for Colombia.

Durán had already played thrice for Colombia and is now the second Chicago Fire teen to leave the MLS for the EPL, following in Gabriela Slonina’s footsteps. Slonina joined Chelsea for $15m last August.

ESPN reports that the deal to take Jhon to Birmingham, England is worth $18m, with $4m for performance-related add-ons.

Colombian club Envigado, where Durán started his career, is also entitled to a percentage of the transfer fee.

When confirming the move, Aston Villa said, ‘the deal is subject to the player passing a medical, agreeing personal terms, and obtaining the necessary work visa.’

If the deal is finalized without any hitches, Durán’s move would be one of the three biggest in MLS history.

His $22m transfer would match the amount Bayern Munich paid Vancouver Whitecaps for full-back Alphonso Davies. But it would rank behind the $26m Newcastle United paid to sign Miguel Almiron from Atlanta United back in 2019.

Before now, Durán’s career has been watched with great interest by a number of English Premier League clubs, like Manchester United, Liverpool, and Chelsea.

According to reports out of Colombia, Liverpool in the past, sent the same scout that discovered Luis Diaz at Porto before he joined the Reds, to watch Durán.

Portuguese club Benfica was also said to be scouting the Fire striker, he appeared on the front page of Record, a newspaper in Portugal, back in December as teams’ interests in him grew.

Chicago Fire coach Ezra Hendrickson, when speaking on Durán said, ‘He is a player that, once he gets it all together, he can be a really really special player. He has all the tools.’

“He is not only physically interesting especially if you consider his age, but also technically, he’s really good in front of the goal, he’s good in the box, he’s smart, he’s quick with his feet. A raw talent, but really gifted,’ Heitz told the Athletic.

Durán is currently away with the Colombian national team as part of the 2023 South American Under – 20 Championships.