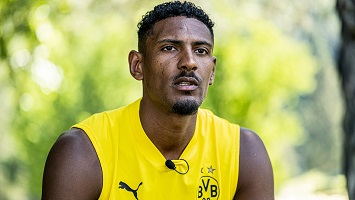 Borussia Dortmund striker, Sebastian Haller has been diagnosed with testicular cancer in a huge blow to the German club.

The striker has just joined them in this transfer window from Ajax and he was training with his new teammates ahead of the new campaign.

He felt unwell and he was subjected to thorough testing which resulted in him being diagnosed with testicular cancer.

Matchplug understands that the striker has now left BVB’s training camp and will begin treatment to recover in time.

His teammates have been rocked by the news and they were shocked at the development when they were informed.

The striker was in stunning form in the Champions League last season and improved his profile in Europe after struggling for West Ham in the Premier League.

We wish him a speedy recovery and they very best of luck when he returns to the pitch to play football.