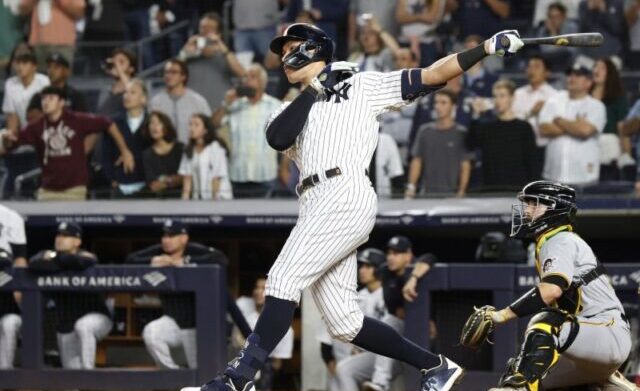 The Triple Crown is still currently in Aaron Judge’s hands for the time being. The New York Yankees superstar player is setting himself up to be in contention for a title that is very rarely awarded to players nowadays. When we passed the All-Star Break, there were only two players that were really in the conversation to win the Triple Crown. Those being the St. Louis Cardinals first basemen Paul Goldschmidt and New York Yankees Aaron Judge. With the regular season coming to a rapid close, Judge is in the lead to become the 11th player in AL/NL history to get the Triple Crown. For those that don’t know, the Triple Crown is when a single player is able to lead the league in batting average, home runs and RBIs.

Judge is currently on a record-breaking season, so his inclusion on this list isn’t really surprising. After all, he’s at 60 home runs right now. This is just two away from the AL single-season home run record. It was previously set by Roger Maris 61 years ago. Judge is barely in first place when it comes to batting average at .316. The next closest is Bogaerts at a .314 and Arraez is right behind him at .313. Judge is far and away up towards the top of the home run category at 60 coming into this next game. And finally, he’s batted in approximately 128 total runs.

There has only been one player since the 2012 season that has been able to win the Triple Crown title. That 2012 winner happened to be Miguel Cabrera on the Detroit Tigers. The gap between him and the next title winner was Carl Yastrzemski on the Boston Red Sox. This happened all the way back in 1967.

Triple Crown Could Be Many Firsts

So, assuming Judge can pull away with this title and close it out down the stretch, it’d be a wonderful feat for a few different reasons. The first is that he’d become the third player in Yankees history to win the title. Following both Mickey Mantle and Lou Gehrig. No other franchise in MLB history has watched three players win the Triple Crown. It would be historic for two different reasons right there. Judge would also be the first player in 100 years since the first Triple Crown was won by Hornsby back in the year 1922.

Then lastly, Judge would be able to extend the Triple Crown run in the American League to seven. A player from the National League hasn’t been able to win this title in over 85 years. Goldschmidt could wind up putting together a phenomenal final stretch of the season to steal it back from Judge. But it would certainly take a lot of effort to do so. If he can however, it would be the first National League player to do so in a historic amount of time.

If you’re looking for more content from us, click here to head over to our main page!