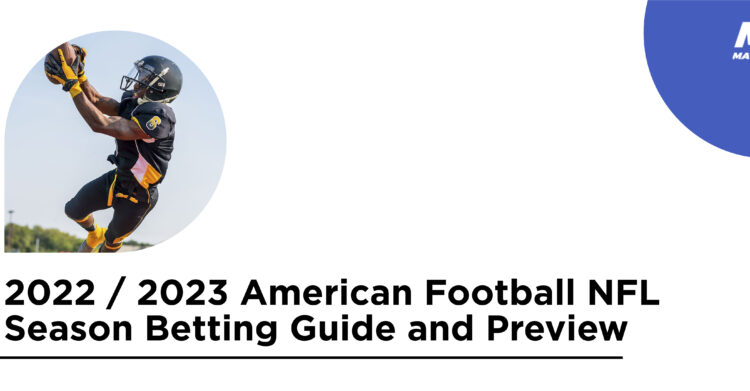 The 2022/2023 American Football NFL season starts on Thursday 8th September and ends with
the Super Bowl 57 happening on Sunday, 12th February 2023 at State Farm Stadium in
Glendale, Arizona.
This NFL preseason promises lots of markets American football bettors can wager on – wins
totals, playoff props, MVPs, and division winners, there are plenty opportunities for punters to
earn money placing bets.
To help you prepare accordingly, we will be sharing some NFL Predictions to help you bet
accurately this season.
We also show some extra information to help you win like previews for the biggest teams in the
League to watch out for this season.

2022/2023 NFL Season Preview
Check out the previews of top 10 contenders for this football season, which are the NFL expert
picks.

Buffalo Bills
AFC East’s Buffalo Bills, almost won the Chiefs in Last year’s Divisional Round (L,42 – 36 OT),
entering as the preseason favorite with a +650 odds to win this year’s Super Bowl.
Quarterback Josh Allen (+700) is the favorite pick for this year’s MVP award, after leading the
Bills to 11+ back-to-back wins seasons, passing for 4400+ YDS and 36+ TD, and rushing for
420+ YARDS and 6+ TD in both campaigns.
Buffalo’s defense was beefed up after they signed three-time All-Pro LB Von Miller in the
offseason. This added to their studded defense, leading the league in points allowed and yards
allowed last year (18.3 PPG, 289 YPG).
If they can avoid any serious injuries, the Bills should rank among the top contenders in the AFC
this NFL season. There is a predicted +350 on the team to win the conference.
Odds and Bets
● Best Bet: Buffalo Wins the AFC East (-200).

Los Angeles Rams
NFC West’s defending champions, Los Angeles Rams might dominate this division which is
regarded as one of the NFL’s strongest divisions.
The Rams secured fourth seed in the NFC with a 12-5 record last season, before beating
Cincinnati in the Super Bowl. Quarterback Matthew Stafford was under a lot of pressure as he
had his first campaign in LA. Stafford led the Rams to their first Super Bowl victory since 1999.
The team didn’t dominate both sides of the ball last season, as their offense was 6th in scoring
and 7th in total yardage (27 PPG, 373 YPG). Defensively, they ranked 9th in allowed points and
13th in yardage (21.3 PPG, 333 YPG).
The Rams reached the finish line, when both sides scored 29 PPG on 378 YPG and left only 8.8
PPG on 282 YPG across four postseason matchups. Giving them the consistency to compete for
the Super Bowl title.
Odds and Bets
● Best Bet: Rams Wins the NFC West (+140).
● Win total odds : Over 10.5 (-115) and Under 10.5 (-115).
● Win NFC West Odds: +140 favorites to win the NFC West.

Tampa Bay Buccaneers
Tampa Bay Buccaneers can dominate NFC South as their MVP contender Tom Brady has
returned for a Super Bowl run. They have no competition, except the Panthers who just got
Baker Mayfield and now have a worthy quarterback.
Last season, Buccaneers won the NFC South with a 13-4 record, winning division champs since
2002 under Jon Gruden and quarterback Jeff Garcia. Falling behind the Packers for top seed in
the conference.
Buccaneers ended their postseason journey in the Divisional round after losing to Los Angeles
(L,30-27).
Although Buccaneers didn’t do well in last year’s playoffs, they’re still one of the best squads in
the NFL, boasting second-best title odds after ranking 2nd in total scoring and 7th in points
allowed last season (29.9 OPPG, 20.9 DPPG).
Odds and Bets
● Best Bet: Tom Brady to win MVP (+800)
● Win total odds: Over 11.5 (-130) and Under 11.5 (+100).
● Win NFC South Odds: -300 to win the NFC South, as heaviest division favorites .
● Win NFC Championship Odds: (+375) is Buccaneers best odds to win by a decent
margin.
● Super Bowl Odds: +750 is second-best title odds behind Bills (+650).

Los Angeles Chargers
Chargers scored 9-7 in their Week 18 Sunday Night Football match last season, to determine if
they’ll go to Cincinnati or go home. Las Vegas won, LA came back from a 15-point fourth-
quarter deficit to force overtime.
Playoffs between Chargers and Raiders, ended badly for the Bolts. Although their downfall
began when they entered Week 18 riding a bad 5-6 SU and 4-7 ATS skid, including losses to
Texans, Broncos, and Vikings.
The Chargers’ offense competed fiercely with some of the NFL’s best; highlighted by them
ranking 5th in scoring and 4th in total yardage last season (27.9 PPG, 390 YPG). But, their
defense was bad, ranking 29th in scoring and 23rd in total yardage (27 PPG, 360 YPG).
If the LA Chargers clean up their defenses this year, they could do well this season.
Odds and Bets
● Best Bet: Chargers to Make the Playoffs (-160)
● Win total odds: Over 10.5 (+105) and Under 10.5 (-135).
● Win AFC West Odds: -+250 to win, this is the centerpiece for what is to be a tough
division race.
● Win AFC Championship Odds: (+850) is Chargers odds to win the AFC.
● Super Bowl Odds: Chargers are +1600 to win the Super Bowl.
● MVP contenders odds: Quarterback Justin Herbert +900, linebacker Khalil Mack Evans
+12500, running back Austin Ekeler +15000, and wide receiver Keenan Allen+20000.
● Make playoffs odds: Yes (-160) | No (+130).

Kansas City Chiefs
Last season, City Chiefs won the second seed in the AFC with a 12-5 record, almost making
their third straight Super Bowl. They reached halftime of last year’s AFC Championships, but
were outscored 14-3 in the second half and lost the contest in overtime (L, 27-24).
Their last seasons’ offense was dominant, finishing 1st in total yardage and 4th in scoring (29.4
PPG, 408 YPG). But, with All-Pro wide receiver Tyreek Hill in Miami exchanged for a handful
of draft picks past offseason. It will be interesting to see how Patrick Mahomes does without
Tyreek.
Last year most people thought Chiefs’ Divisional Round match against Buffalo would decide the
AFC representatives for the past Super Bowl, and it felt like an AFC Championship Game, as
they scored an overtime victory at Arrowhead Stadium by a 42-36 score.
However, in a trip to the Super Bowl last year, Chiefs fell apart, but the squad is expected to be
very focused this season.
Odds and Bets
● Best Bet: Chiefs to Win the AFC (+450)
● Win total odds: Over 10.5 (-120) and Under 10.5 (-110).
● Win AFC West Odds: -+150 to win, as the favorites to claim their 7th straight AFC
West title.
● Win AFC Championship Odds: (+450), narrowly trailing Buffalo (+325) for best odds
to win the conference.
● Super Bowl Odds: +900 to win the Super Bowl.
● MVP contenders odds: Quarterback Patrick Mahomes +800 and tight end Travis Kelce
(+15000).
● Make playoffs odds: Yes (-220) | No (+175).

Green Bay Packers
The Packers won the NFC North, earning top seed in the NFC with an exceptional 13-4 record
last season. Aaron Rodgers’ second MVP campaign, ended in the Divisional Round, after
Packers failed in their first round Bye and lost to Niners (L,13-10) at Lambeau Field.
The team traded All-Pro wideout Davante Adams to Las Vegas during the offseason, depleting
their receiving core to Allen Lazard, Christian Watson, and Sammy Watkins. Although Rodgers
might be affected by the loss of Adams, Packers have been unpredictable.
Adams ranks amongst the league’s top receivers, and his departure is a setback. However,
Rodgers is one of the NFL’s most talented quarterbacks. The Packers are expected to struggle
without Adams, they will still be dangerous for this year’s playoffs.
Odds and Bets
● Best Bet: Packers to Win NFC North (-185).
● Total odds: Over 11.5 (+110), Under 11.5 (-140).
● Win NFC North: Listed as -185 favorites to win the NFC North.
● Win NFC Championship: Packers are deadlocked with Ram +500 to win the NFC.
● Win Super Bowl: +1100 to win this year’s Super Bowl, they are tied for fourth on the
pole besides the Rams.
● MVP Contenders: Quarterback Aaron Rodgers +900
● Make Playoffs: Yes (-450) | No (+330)

The Ravens will play better this year, although they separated from WR Marquise Brown in the
offseason. This doesn’t seem like a huge loss, but tight end All-Pro Mark Andrews will do most
of the work.
We will see if the receiving core headed by wide receivers Rashod Bateman, Tylan Wallace, and
the crew of undrafted rookies will be enough to offensively help Ravens go back to their former
glory.

San Francisco 49ers
San Francisco ended last season third in the NFC West with a 10-7 record, earning them a Wild
Card spot. They had a bad 3-5 start, but secured a 7-2 to win their second playoff berth since
2014.
Much wasn’t expected from them in the postseason, after their first round Draw with Dallas.
However, they beat the Cowboys and Packers in last year’s NFC Championship Game. Almost
pulling a three-game season sweep of LA, but lost (L, 20-17).
Niners were eager for a new quarterback, attempting to trade Jimmy Garoppolo this past
offseason, to let Trey Lance take over, but couldn’t get one.

Cincinnati Bengals
Last season, the Bengals made the AFC North the most competitive in the league, by finishing
(10-7) and edging Pittsburg by a half-game to win the division crown.
The half-game edge favored Cincinnati, while they hosted Las Vegas (10-7) in their first
postseason contest, followed by road matches against Tennessee in the Divisional Round and
Kansas City in the AFC Championship Game.
The Bengals numbers didn’t go off the charts in any department last season, though their offense
was 9th in scoring and 14th in total yardage (26.3 PPG, 355 YPG). Defensively, they ranked
13th in points allowed and 19th in yardage allowed (21.8 PPG, 352 YPG).
Bengals wowed the football community when they got a ticket to Super Bowl 56. While their
talent level doesn’t measure up to other AFCs topdogs, their last year squad was an example of
how youth and health are essential in the NFL.

Denver Broncos
The Broncos finished last in the AFC West last season, gearing up for the homestretch, sitting
within a playoff spot at 6-5. But, they ended with a poor 1-5 skid, with four losses against
division opponents, resulting in a dull 7-10 mark for the year.
The Broncos have a good defense, with a 2nd rank in points allowed and 9th in total defense last
season (18.9 PPG, 326 YPG). Their offense is bad, ranking 23rd in scoring and 19th in total
yardage (19.7 PPG, 331 YPG).
Experts say Denver needed a quarterback to make the championship, so this offseason they
acquired nine-time Pro-Bowl Russell Wilson from Seattle in exchange for Drew Locke, tight end
Noah Fant, and 5 draft picks.
Odds and Bets
● Best Bet: Broncos Make Playoffs (-150)
● Win total odds: Over 10.5 (+120), Under 10.5 (-150)
● Win AFC West: +250
● Win the AFC Championship: +850

How To Bet On The 2022 / 2023 American Football NFL Season
Before wagering on the NFL season, there are three Free football tips which could come in
handy for your NFL betting:
Examine the odds and numbers before the teams
This includes checking the moneyline, totals, and point spreads.
Don’t favor local teams
Don’t let homerism make you wager on a local team you have personal feelings for.
Monitor the weather
Most teams in the NFL matches are affected by weather conditions when they play. Find out
which ones.

The football season offers bettors the opportunity to make money and win big. For a winning
Football Prediction, visit Matchplug; we offer Sure football predictions, tips, and show NFL
Picks.